It pains me to say this, but there are quite a few people these days who have a negative opinion of hip hop, and I think they’re justified. When you look at some of the ways it is represented in the mainstream media, it makes sense. Radio stations are flooded with uninspired songs touting shallow pursuits like designer clothes and emotionless sex. Rap icons glorify violence and drug dealing. And major hip hop blogs spend more time covering twitter beef and groupie fights than the music itself. But that’s not what hip hop is supposed to be about, and it’s certainly not what it was when it started. Most people think that “hip hop” refers only to the music, but in reality, when the term was coined it encompassed five pillars; rapping, DJing, B-Boying, Graffiti and arguably most importantly, Knowledge of Self. Regardless of which of the first four pillars you engaged in, it was always a path to the 5th pillar. Today I’m going to talk about using my favorite of these pillars, rapping, to increase my knowledge of self, as well as heal some of my past wounds in the process.

For those of you who have listened to my music or seen me perform, you may remember me best for my comedic songs. They tend to be the ones that people enjoy the most. But if you’ve dug a little deeper you will probably find that I can get quite introspective with my lyrics. In fact, even with my comedic songs I will often do this. I like combining levity with seriousness because it makes inner work fun. I want the pursuit of personal growth to be enjoyable, and I can’t think of a more joyous way to do that than to rap about losing my pants while taking a long, hard look at what’s underneath. The surface that is, not my pants.

“Then I found my pleats just in time for a hot date with,

this girl I met at the class with all of the sadists,

Many times in my life I’ve put on a mask to impress someone, whether that be a friend, a teacher, an employer, or a prospective lover. And after writing a four minute song of comedic punchlines about misplacing my corduroys (which are making a comeback soon I swear to you), I somehow stumbled upon this nugget of wisdom. This is often the progression of events when I write. No matter what the subject is, I will almost inevitably circle back to uncovering something about myself. Or at the very least reminding myself of a lesson that I may have forgotten.

I lived in Ubud for 3 years and I experimented with my fair share of healing modalities, for lack of a better word. Some of them were very powerful. Some of them were downright dangerous. The realization that I kept coming back to, over and over again, was that the most potent healer in the world, is always yourself. I believe that there are many great healers that can help, and many amazing tools to improve your own capacity for healing, but regardless of who or what you engage in, responsibility for self is always the key. And there is no chance of responsibility for self without knowledge of self.

Which brings me back to hip hop. There are few things in the world that I find more ecstatic than finishing an awesome verse and rapping it all the way through for the first time. And then performing that song live for the first time and getting an enthusiastic crowd reaction. So with the idea that all hip hop pursuits are meant to funnelled into an increased knowledge of self constantly in my mind, I can heal myself while I do what I love. In fact, I can’t think of a better way to heal myself. So let me give you an example of when I recently had a major epiphany while writing a song. The track is about this sensation I’ve experienced lately where my mental perspective and emotional state spin around so fast that I can’t tell what is true and what is ego, and all I can do is just sit back and watch. I knew I was going to write about this when I started but I had no idea where it would go. But when I’m focused and in the zone, my words tend to go where I need them to. They took me to a girl I had recently developed feelings for. One minute I was in love with her, the next I thought my desire stemmed from my ego fearing the loss of her. I realised that this whole spinning sensation had blossomed from my ambivalent feelings for her, and that it was seeping into the rest of my life. So I explored this by writing about it, and by the end of the verse, out popped the epiphany. It was something that had been holding me back for a long time and I never even realised it.

I discovered that I had a deep rooted belief that I could only achieve my goals if I was alone, and so I was preventing myself from pursuing romantic relationships and unconsciously using this excuse to justify it. This realisation cleared up my thoughts and emotions, the spinning sensation subsided, and I was able to feel clearly what I truly wanted. So I went for it. And though I didn’t get it, I’m much better off for trying. I’m pretty much always better off for trying, and I couldn’t even begin to count how many incredible things making hip hop has influenced me to try.

Jonny Freesh is a 3rd culture kid originally from Canada, last seen in Indonesia and now found frequenting hip hop nights in Melbourne. He brings a truly original brand of hip hop to the table that he likes to call “explosively quirky”, and is known best for his visually jaw-dropping music videos. When he’s not rapping about losing his pants or his beard, you’ll probably catch him ranting about how crowdfunding platforms like Patreon are the future of the music industry. 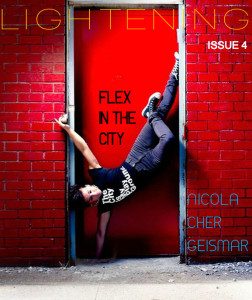 In 2011 I suffered from a knee injury where I was no longer able to dance. After the initial shock of the injury news, I decided that I had to find a new way to express myself that would be non-impacting for my joints so I created “City Is My Playground. I began sampling from my many years of Hip Hop dance training, drawing specific inspiration upon the “freeze” component or static shapes one creates with their bodies from the art of breakin’ (breakdance). I then integrated this freeze form athleticism and blended in the mindfulness and posturing influence inspired by my Pilates education and teaching. The final ingredient was transferring this new found mode of self expression of static shapes and forms using my body, from the studio out into the city. I started to explore the vibrant streetscapes and street structures that surround us and how I could integrate bold physical shapes and forms with their support.

I want to inspire people to start looking at the city as their playground, and look beyond traditional methods of training, self expression and creative physicality.

For me, the city is the canvas and the street structures are the tools. It’s about having fun in the places and spaces we live in and having a sense of pride towards our surroundings and environment. 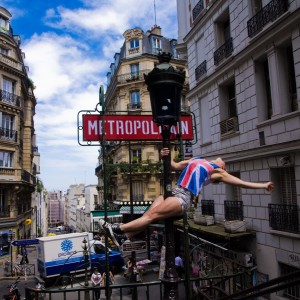 Through the unique blend of body art (or what I describe as physical graffiti) and cityscape urban furniture, my mission is to flip the way people view and experience their city.

I lead “Flex in the City” workshops, where we follow a specific adventure route around the City. Using a creative and playful approach, I draw upon low impact mixed modalities/movements, introducing creative isometrics- static shapes or as I call them “flexes”- and Pilates/athletic dance based conditioning, to build core and upper body strength.

I am sensitive to the fact that this is a new style of physical training, therefore I ease people in. The aim is to inspire others to look at what’s around them that they can strike a shape in, on or between. It’s so much fun to go out with a group flexing around the city, whilst getting friendly with the doorways, streetposts and walls that surround us. The possibilities for creative physical expression are endless.

Having travelled to NYC and Paris with City is my Playground, I hope to bring the Flex in the City workout to more people in as many cities as I can. I am passionate about sharing the tools and techniques that I have found so useful to maintain my passion and physicality, whilst empowering people to start looking at the city as their playground and have fun with it

The second movement experience that I have developed is the Free Your Spine Series. The live masterclass consists of 8 short movement sequences, that focus on spinal flexibility and mobility, whilst stressing the importance of moving.

Sitting is fast becoming the smoking of the 21st century.

The digital and office worker lifestyle that we live in means that our bodies are becoming more and more sedentary and less and less active.I really want to encourage people to take a few minutes out of their day to get moving in an accessible, fun and informative way.

Having been a Pilates educator for over a decade, it is not uncommon to meet many people with a slipped disc or severe lower back complaint. The Free Your Spine series delivers accessible movement sequences which will wake up the bodies innate way of moving, whilst not compromising physical form or technique. The importance of self care and balanced cross training cannot be underestimated. Between the Flex in the City workout and the FYS method, I think there is a nice mix of strength and stretch components to help maintain an injury free life! This has been my personal movement practice and mantra for four years and I am excited to share the FYS masterclass programme. It bridges the gap between my passions: creative movement/physical therapy and holistic practices.

In essence, through a knee injury I discovered and developed a whole new way of moving and expressing. I had no choice but to create and innovate other ways of using my body. Four years on now (post injury) and it is a privilege to be able to share the work and mission behind both City is my Playground and Free Your Spine. 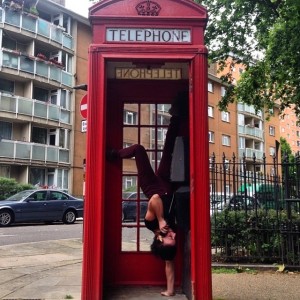