The Light at the Top of the Mountain

Magic is the quintessence of life – its spice and splendour. Certainly our world would be poor indeed without it – yet until a few years ago I didn’t even believe it existed. Like most folk I thought the ‘supernatural’ was something that belonged in a paperback novel and failed to apprehend the true meaning of the word. As a young man I arrogantly assumed the world had already been safely catalogued, measured and mapped by post enlightenment scholars and magic, even if I might have desired it as a child, simply wasn’t relevant to adult life.

I first climbed the Pyrenean mountain of Montségur on a glorious late summer afternoon in 1990. I was working for a British television network and wanted to view the ruins on the summit as a potential location. I knew little about the mountain then, only that it had been sacred since the end of the last ice age and was equated by some pseudo historians with the mythical Grail castle of ‘PARZIVAL’. A ruined temple on the summit dating to the time of the Celts was fortified in the 13th century at the behest of the ‘Cathar’ high priestess, Esclarmonde de Foix. The adepts of her faith took refuge there and the castle endured three sieges before falling to crusaders on March 16 1244 when some 260 martyrs perished on the ‘Field of the Stake’, the largest mass burning of ‘heretics’ in European history.

Myself and my then partner arrived at the ruins late in the day and climbed the battlement to take in the panoramic view. As we watched we saw a spume of cloud boiling towards us. This being the nineties, we half expected it to be a UFO. But it wasn’t the ‘mothership’. It was a violent summer storm and within moments the mountaintop was ablaze with lightning. We took refuge as multiple bolts of plasma flickered around us, reaching down like fiery fingers into the castle. This was the supernatural alright – nature to the power of ten. We told ourselves afterwards it was only a storm – yet the memory of that light streaming from the castle gate and the strange, sweet smell that accompanied it stayed with me.

In 1996 I was removed from my position on a multi-million dollar feature project I had been developing with New Line Studios and Time Warner. The circumstances of my downfall are too complex to enter into here, having subsequently become the subject of a feature film in its own right (‘LOST SOUL’ – 2015), yet my downfall was complete. My agent stopped returning my calls and I found myself blacklisted in Hollywood. My partner dumped me for a passing millionaire who could keep her in the style to which she was accustomed and stripped of my green card I found I could no longer remain in the States.

Very few things made sense in my life any more. I remember feeling grateful that I didn’t have children or own a dog at the time. In the midst of that darkness I recalled the light at the top of the mountain and, without really understanding why, began to move towards it as if it were a beacon, a promise that maybe there were some things more powerful than the glacial forces of money.

I spent countless nights on the mountaintop, armed with a camera, hoping to see that supernatural light again and capture it on film. In the course of those vigils, I met others who held Montségur sacred and learned its true history. In 2001 my mother was diagnosed with lymphoma and in desperation I treated her with a ferrous solution drawn from ore samples found in the caverns beneath the castle, a substance equated by occult scholars with the ‘black stone’ of ‘PARZIVAL’ – lapis Exillis. To my amazement she went into remission – probably just placebo effect but the Grail myth certainly played a decisive role in her recovery.

The mountain was changing me too, the fresh water and clean, oxygen rich air undoing the attrition of more than two decades in London and Los Angeles. In 2007 my vigil was rewarded when I experienced what can only be described as a manifestation of the Goddess – the very essence of magic incarnate – a waking vision of the ‘Cathar’ priestess, Esclarmonde accompanied by that familiar smell of roses and lillies described in Marian apparitions as the ‘smell of sanctity’. Had I been alone I might have assumed I had finally lost my mind but mercifully there was another pilgrim present who experienced the same things as myself. A ‘shared hallucination’ sceptics might argue – yet in that moment I knew, beyond doubt, the stories about the castle were true and falling to my knees before the radiant figure I wept like a child, not out of sadness but out of gratitude and joy.

I live alone with my books and my cat now in a cottage at the base of the mountain. Since relocating to Montségur I have become the only English speaking mountain guide in the area and in the summers I have my hands full, there being no shortage of seekers to shepherd. Close to one hundred thousand make their way to the castle gates every season. Only a fraction have the slightest inkling of what this place is but they are drawn to it nonetheless, looking for something that can’t be contained in words. In truth, many of them are pretty damaged by the time they reach me. You usually have to be, on some level, to go looking for something as ineffable as a Grail. A couple of years back I finally dropped the other shoe and got myself ordained and while I don’t wear a dog collar I am at least licensed to perform weddings, baptisms and funerals.

What little time I have to myself I spend in meditation and study. Under the influence of the divine flame my old life was consumed and a new one conjured like a phoenix from the ashes. On the whole I don’t miss the ‘real’ world. It seems like a dream at best, at other times like a vaguely remembered nightmare. When I am forced to leave the magic mountain on one mission or another I am always grateful to return, counting each day here as a blessing. The seclusion is a Goddess given opportunity to practise my art and hone my craft, the knowledge being its own reward and solace. Most folk find it hard to fathom why someone like myself would choose to abjure the world, its 21st century conveniences and comforts, to deliberately live as a quasi-medieval hermit. Outsiders do not understand that I am, above all, happy, nor if I could live my life again would I choose to live it any other way.

A documentary feature, “The Otherworld” can currently be found on NETFLIX. It is based on these experiences and will be released in the US on BLURAY and DVD later this year. 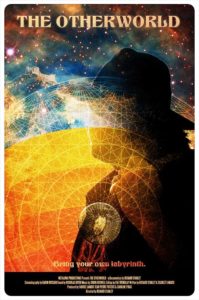