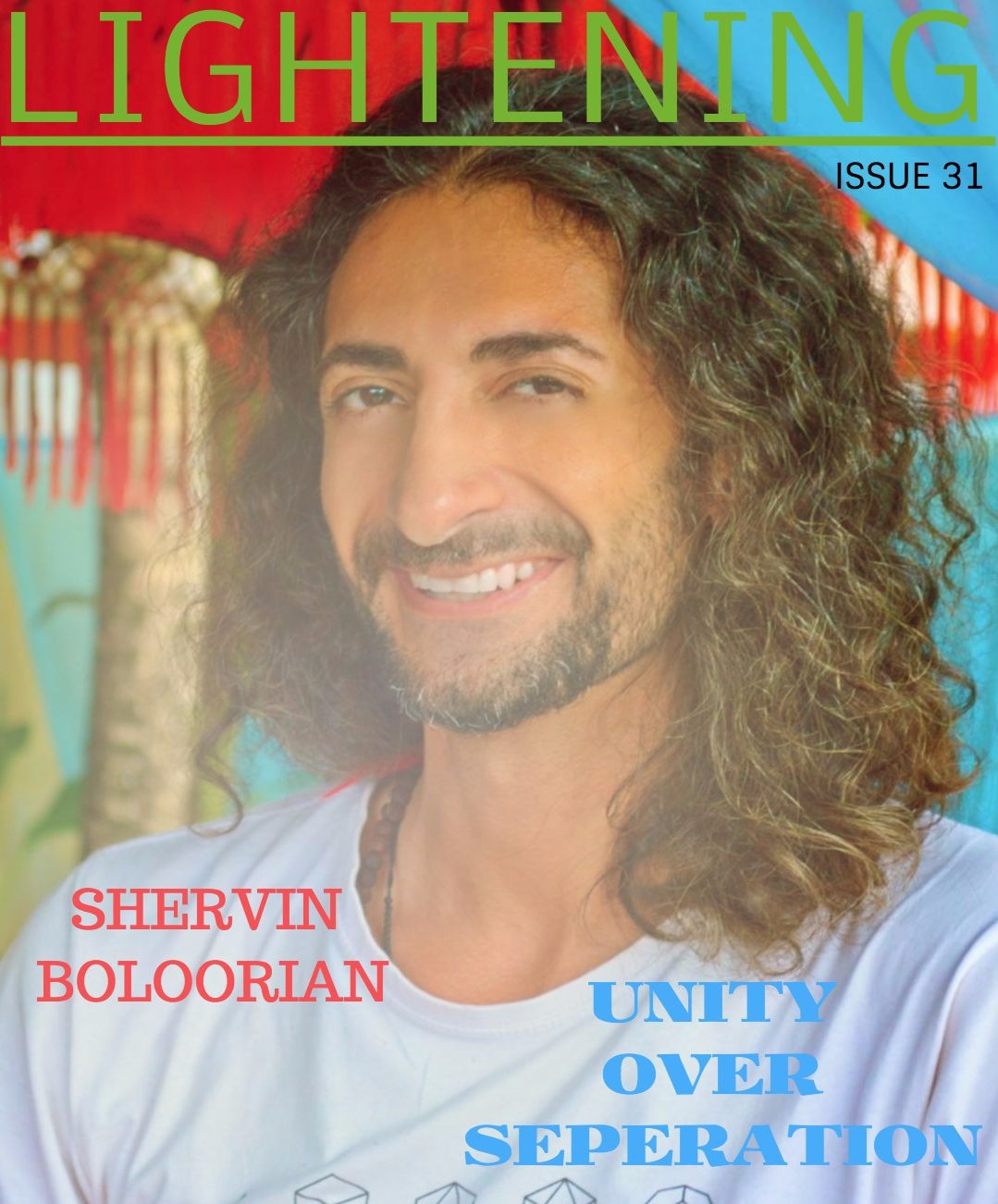 Q: What inspired your new album?
SB: It’s an album of sacred songs, and chants from ancient texts. Each one has a positive message and is recorded in the original Persian or Arabic. The songs on my album “One with the Beloved” are mostly original compositions and others are my versions of traditional Sufi Mantras and folk songs.
Q: How did your upbringing influence this album?
SB: I grew up in Britain in an Iranian refugee household. We spoke Farsi at home (Persian) My parents had lost virtually everything in Iran. It was humbling to experience being an outsider and to learn the importance of compassion and friendship at a young age from certain English friends we had who were kind to us.  I went to the US to go to college after getting my GCSE.
Iranians revere figures like Rumi (a 13th century philosopher and poet), whose texts are the main inspiration for the lyrics used in my album. Rumi himself was a refugee who had a revelation which transformed his creativity. I resonate with Rumi’s journey and his wisdom is timeless and universal to me. Leonard Cohen and Coldplay are among the most well known musical artists who have been inspired by his messages, yet his name seems to fall into obscurity. I am hoping to change that through my new album.
Q: Can you explain more about your vision of unity over separation?
SB: Whenever there is political violence that may hold a person in dread or despair that you pause before judgement and consider that this is a desperate act and not how people normally are. Of course some will say that is already happening, but is it really sinking into our consciousness that Islam, Middle Easterners or people of faith in general are not a danger? When people make these claims, they are attacking every person of faith and rather than to debate which side is wrong or right, I wanted to make a contribution showing the world that there is a universalist message from within a faith, which is wrongly associated with violence.
We in the West are urgently lacking when it comes to reversing stereotypes in a meaningful way about civilisations that we have been at odds with. Policies of alienation and adversity are outdated and are not working as they stand. We need to start focusing on humanising and not ostracising those we cannot understand—and engaging from that place. That means calling on imagery, figures in history, literature and artistic expressions that can help us regain a more complete picture of those who have been our so called “enemies”. If we can do it in a way that is relatable, then I believe, lives can change as well as perspectives.
I believe everyone can relate to a figure like Rumi because of the tremendous appeal of his writings and it’s no accident that he is experiencing a resurgence today at a time when our relationship with the Middle East is at its most chaotic. We need more of his voice. 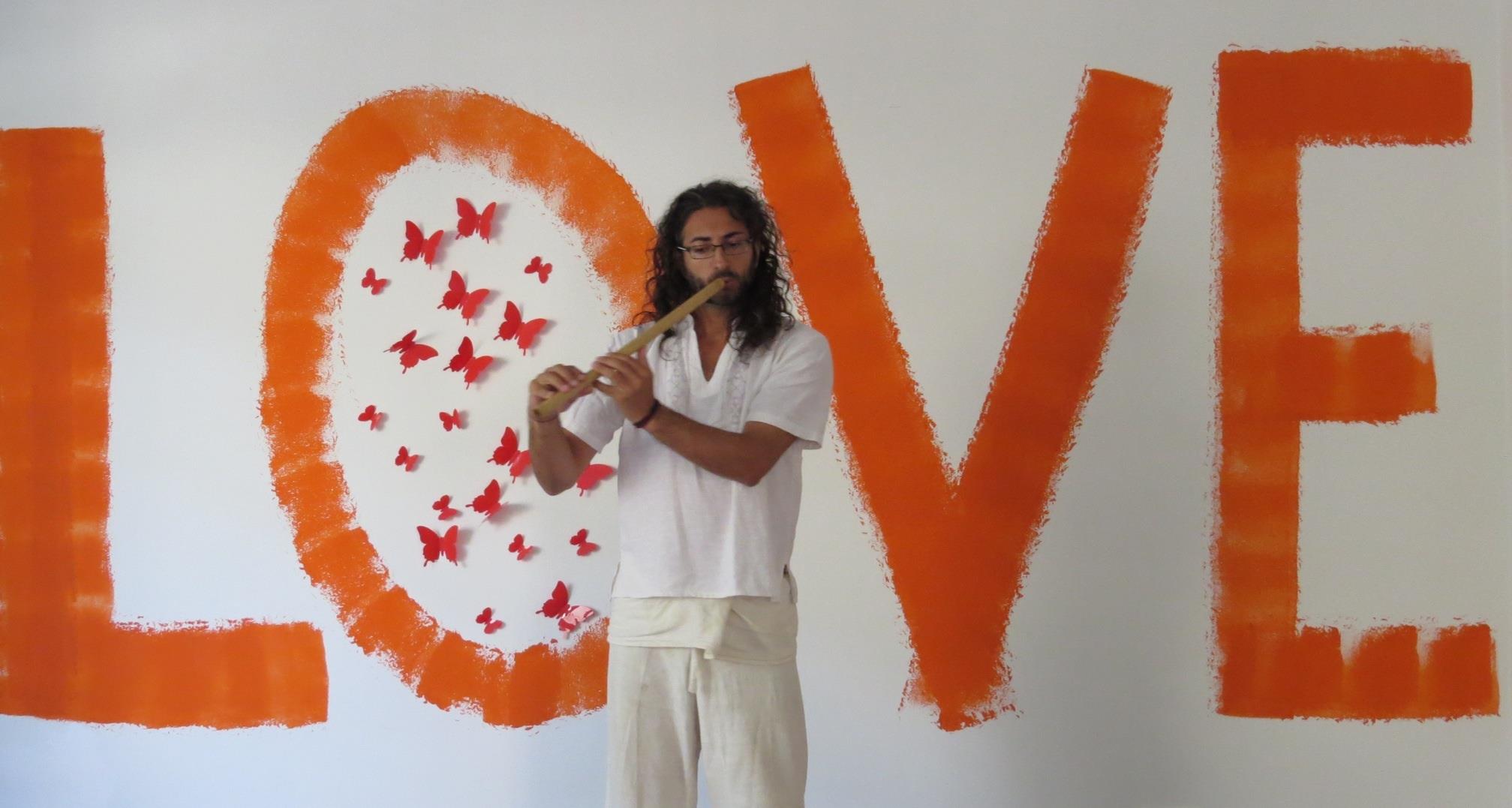 Q: What measures do you feel people could take to try to overcome the current worldwide barriers of political mistrust?
SB: I could say what everybody else says: “vote” “be engaged civically” and “write to your elected Rep” and generally I would respond in such a way, BUT the truth is we’ve had colossal failures when it comes to our policies concerning the Middle East.
When it comes to something like our relationship with Iran for example (and I worked in Washington on this issue) there is a lack of reliable information and it creates this sense of desolation no matter what we do or where we turn. Historically, when our institutions are gridlocked, it’s up to the grassroots to get involved and to come up with alternative ways of pursuing the positive change that we urgently need. That’s not practical or easy when there is a large distance and gap in cultural awareness.
Music and the Arts are powerful tools in rebuilding that human bridge. Their potential is untapped here, and if we can make these tools accessible and personal, if we can trace the relationships between societal wounds and the wounds and fears within each person’s individual consciousness that exists, then there is hope, and I believe Rumi would approve.
Q: What is Sound Healing and how did you first come across this?
It’s a holistic modality that involves vibration and frequency (not just music) and it can have positive effects on the consciousness and the physiology. I learned about the cellular research that Fabien Maman was doing on blood cells and their response to sound vibration and was inspired to become a practitioner. I went on train at Fabien’s Tama-Do Academy of Sound, Color and Movement and became certified as a sound therapist in 2011, two years after leaving my career in Washington DC. 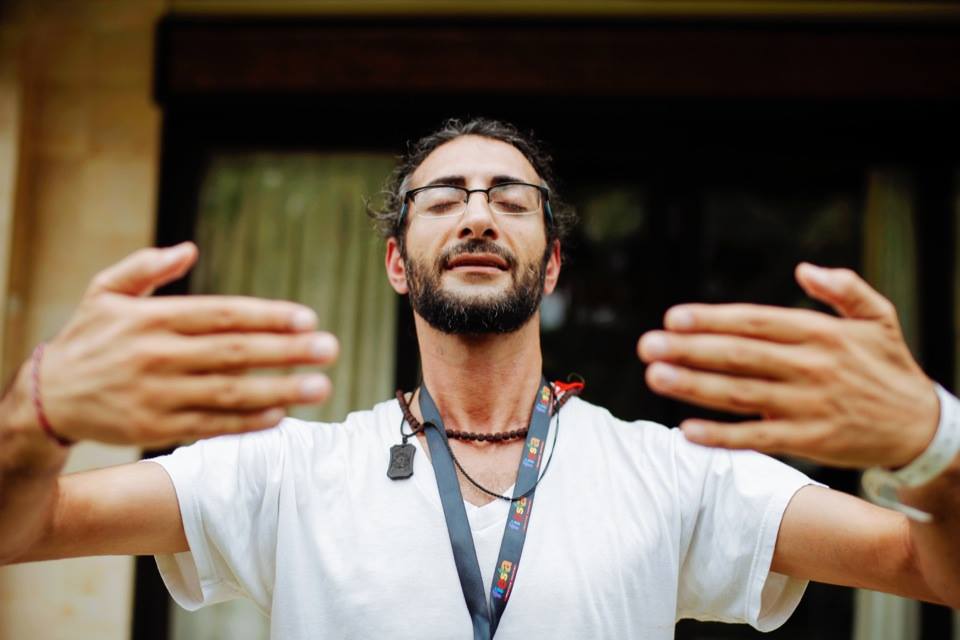 Q:You have worked in the past with many major businesses such as Google to provide their teams with Sound Healing and Talks. How did this come about and what has been the feedback and positive impact of these?
SB: I had someone who took a workshop with me in Bali who worked at Google. They invited my to their offices and I did a presentation for them in Singapore and had a great response. I have also done corporate events in Bali and shared about my personal journey to retreats and private groups as well as giving a demonstration of the deeply relaxing effects of the different instruments I play. 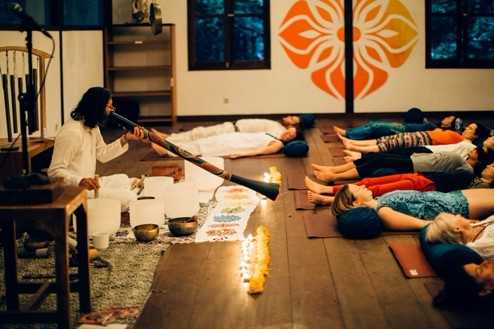 This happens in my practice more often than not. Over half of my clients, when asked why they came to see me, say “I don’t know. I know there should be more in my life but I cannot access it.”  When I ask what makes them happy or what they want to do, inevitably the answer is often times “I don’t know.”

I feel like so many people these days are disconnected. They don’t know themselves, they don’t know their heart or their soul. They only know their thoughts- a frantic collection of media, family and societal driven wants and insecurities. Perhaps this is why the world is in the state that it is, because so many of us aren’t connected with our inner selves and therefore the world is fragmented, not whole. We are so full of expectations, obligations, projections and programming that we literally “don’t know” what we even want in life.

This is where I help people. I am trained as an energy worker in various modalities, as an intuitive and as a counselor. When people show up in my office all of these skills are used in an effort to bring about some peace, some healing, some shift. My work is ever-changing, deepening, expanding.

The healing modalities can be murky waters in terms of training and practitioners. Pretty much anyone can call themselves an Intuitive or Energy Healer and indeed, how do you train or measure these things anyway? I have always been drawn to rituals and mysticism and, after working in the corporate world for years, this led me to research various worldly religions and spiritual traditions in an effort to find peace and happiness in my own life.

My first healing course was in Reiki, including master level training. I went on to complete a 4-year program called Helix, which has foundational pillars of psychology, spiritual disciplines and energy work/metaphysics, and I was ordained as a minister of the Helix Healing Ministry. The program gave me a strong psychological & spiritual knowledge base, along with years of experiential work as a psycho-spiritual counselor. While continuing my corporate work, I started seeing clients for healing work in 2005 in New York City. In 2009 I stepped out of the corporate world and put my focus on my healing practice.

Since moving to Ubud, Bali in 2012, I have opened to even stronger energy and a deeper connection to my “Higher Self” and with the Divine. My counselling background taught me how to hold space, so clients feel safe enough to explore some of the most intimate and vulnerable places in their life during our sessions. This space allows for their potential healing.

I am in an interesting position, in which I am able to observe what seem to be collective trends in healing, because of where I work. I am based in the largest yoga and healing center in Ubud, Bali, a town known around the world for being a spiritual mecca for seekers, young and old. Tracking the collective healing by various regions in the world has been fascinating.

I have been in Ubud for almost 5 years, offering energy work and intuitive guidance. With my work I bring people back to the heart, to their inner wisdom, to their bodies. I try to deflect any projections they have around me being able to heal/save them and lead them into understanding that they hold the power themselves. People come to me and I do everything I can to find that space in them and lead them there. This might happen through talking and inquiry, it might happen through working energetically on the table.

I can guide clients back to hearing their Truth, but they have to do the work themselves. I’m not a magician and I don’t have any magic cures, but I do have Presence. And in Presence I hold a certain frequency or vibration, which is then offered to the person in front of me as a meeting point. I work energetically, either hands-on or off. I reflect back to them the perfection that I see in front of me. I hold a vibration of Love which surrounds and envelopes the client, inviting them to soften and expand. This is where shifts can happen.

I currently see people for one-on-one sessions and lead meditation classes out of The Yoga Barn in Ubud. I also offer intuitive sessions, supervision for those working in the healing realm, and an 8-week mentoring program all via Skype for my international clients.

In August I am leading a 6-day workshop for women entitled POWER WEALTH WISDOM and I am so excited about this! Women gathering in community to SPEAK about their lives, LISTEN to others share their journeys, and RISE up to responsibility. I have gathered an amazing group of women to share with us how they bring their evolution as Powerful, Wealthy and Wise women into their professions, relationships, family and daily lives. After each talk we will work with the subjects at hand and find ways to incorporate changes into our lives that support our evolutionary path.

Of course, I am still doing my own work too! I believe it is really important to maintain personal growth, whether you are an energy worker or someone who just wants to be happy in their regular life. I am always open to new ideas and I am curious about what others know that I don’t. I will check out anything that allows me to feel expanded, free, and plugged into the Universe. When I began my spiritual quest I wanted to learn everything so I took lots of classes and read a ton of books. All of that information has helped me build a foundation in which I step off from. I feel the more I learn, the more I realise I don’t know, and yet I believe more and more that I can actually find all that I need to know within- with patience and persistence and continual ego check points. 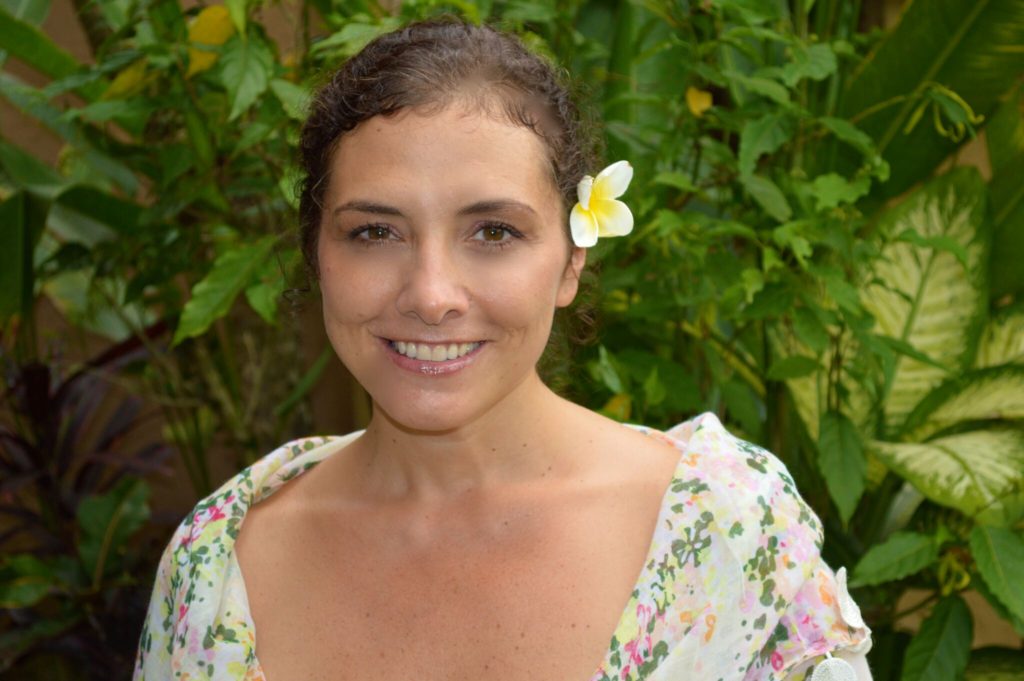